The Precentor in Charlotte’s Legacy

This site is dedicated to Jay J. Sulzmann, Sr. the “Precentor in Charlotte”. The information on this site is part of his legacy for all who love singing the Psalms. 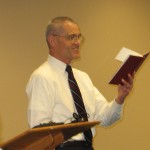 I was introduced to singing Psalms through Jay Sr. my beloved husband of 28 years. Since childhood, he had wondered why churches weren’t singing them. In the 1990’s, a friend introduced us to the world of Psalm singing congregations. For 14 years, Jay led congregations in the a capella (without accompaniment) singing of Psalms mainly using the traditional split-leaf Scottish Psalter The Scottish Psalmody. We moved to the Charlotte area in 2005 where he began his blog “Precentor in Charlotte” as a resource for those desiring to sing from the Scottish and Irish Psalters*.

Jay had a deep appreciation for music and a great love and reverence for God. Although he never received formal music training, Jay taught himself to play the piano at age 40 during the time he worked in the field of computer software. All of these prepared him for his role as a Precentor**.

After Jay Sr.’s death in 2009, I compiled and expanded his teaching notes and musical transcriptions to aid in the singing of the 1650 Psalter. The book and website were developed so that his good work would not be lost. Unable to find anyone willing to publish it, The Psalms of David in Metre – A Supplement was self-published in May, 2012. God provided many people to assist in the preparation of both the book and this website for which I am most thankful.

*A Psalter is a book for singing the 150 Psalms. It is a type of hymnbook. Split-leaf psalters contain both words and tunes. Pages with the words are at the bottom and separate pages with the tunes are provided at the top. The Black Psalter contains just the words.

**A Precentor leads the congregational singing of Psalms, similar to a choir director or song leader in other congregations.  A tribute to Jay by a friend — “As a precentor, he invested much time and energy in creating spreadsheets and tables with psalms and their corresponding tunes for the edification of the saints. His precentor blog remains behind as an indicator of his love of the psalms and his desire to help God’s people in their singing of his praises, and the Daily Devotional Forum on the PB [Puritan Board] is filled with his psalm selections. I often spoke with him about the work involved in precentoring, his favorite psalter (The Scottish Psalmody), and other aspects of psalmody (his favorite psalm was 121 to the tune French)… His love of God’s people, God’s Word and, especially, the psalms, permeated his life…” (A.M., 2009)